and the fit hit the fan

Once. One time, 20 years ago, my son threw a tantrum in a store. A doozy. We hadn't gotten 30 feet inside when he asked for a quarter for the bubble gum ball machine. I said if he behaved we would get one afterward (you can see here how I was totally asking for it, baiting him) and as we say the fit hit the fan.

I immediately returned my cart and apologized for the few items that would need to be restocked and I removed him from the store. Twisting and screaming as if I were ripping his finger nails out with rusty pliers, I walked (read dragged) him to the car. Where he attempted to exit the car. Where he wouldn't stay in a seatbelt. Where he was screaming and crying blindly with no memory of what he was upset about, I'm sure. I just sat in the backseat, letting him scream, preventing him from opening the door and letting it all flood out. As he began to exhaust himself, I offered some comfort, ssshushing, it's okay now. He moved beside me and laid into me to rest. The consequence was that we were leaving. He accepted it and fell asleep driving home. Calmly we talked about it later.

He was a child with hyper-focus. Sometimes he would latch on to an idea or a thing and he couldn't shake his focus on it. I had learned with him, to head off that at first sight but I missed it that day. No biggie. Tantrums happen. No guilt, no shame, no blame.

But that day led me to this. And this was the very best $5 I ever spent at a yard sale - hands down. 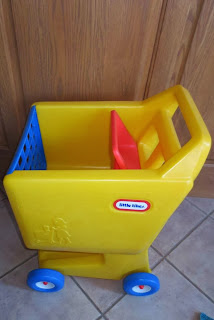 I am not sure that I ever went to the grocery store without 1-3 of these in tow ever again for the next 15 years, no kidding. Shopping trips were never a nightmare. They were an outing for us that we truly looked forward to having. Shopping Day was a big day. The kids would sit and we would make the menu and the list. Their lists had things we actually needed on it. They had money, coupons, and they had special assignments. Each week they got to pick a mystery fruit or vegetable for everyone to try. They had to check the price of milk to let dad know and we had to choose 3 boxes of cereal. It was busy stuff. We weren't in any hurry. We talked and sang songs, and looked at things. As they got older they used regular carts and had more meal planning responsibilities. By the time they were 12, I could let them go inside the store, shop for a list, pay with their own debit card, check out at the self serve checkout and come back out. They felt so proud of themselves. As well they should.

We always, always went to get a bite to eat before shopping - no hungry shoppers. They thrived ont he routine. We always had drinks with us. I miss shopping with my babies more than I can tell you. Bargain hunters all of them, self-sufficient, smart, impressive. They don't just go and blow money and get whatever they "feel" like getting - they understand that the food costs are the second highest expense in our home, next to the mortgage. They don't usually opt for easy food when they can prepare it. They are kind of frugal, but they also know they can splurge on their favorite yogurt and good toilet paper.

Now, I either go to grocery alone, or I just send one of the minions. I miss taking my little pack to the store, with our carts and their lists. Lindsey with her little purse flouncing through like she was in a magical forest and Corey attacking his list with efficiency and zeal. William, was somewhere in between the two flouncy but on a mission.

Buy one of these carts, keep it in the trunk, always have a plan for the store and soak up those moments before you blink and they are gone.

I appreciate your feedback. Keep it classy!

I'm a housewife. A Housewife Extraordinaire is the woman of Proverbs 31. Growing in my vocation to be this kind of woman is my life's work and God's calling in my life. Somedays I knock it out of the park and other days not so much. And it's all good.
I'm a former military wife, homeschool mom of 18 years and I'm committed to creating a beautiful, well-run home on a budget and making a life I enjoy and that brings my family love and peace.
I am obsessed with finding old things and repurposing them, giving them a new lease on life. I love creating new things. I love decorating, building and exploring art and creativity every day.
Everything I learned about repurposing I learned from God, who took my broken life and made me new and useful again.
I'm always working on a project. Always. I am passionate about my faith, my marriage, my family and more than a few little pop culture obsessions like The Walking Dead and Comic Books.
I love biking, walking, cooking, gardening, discussing politics, and theology, watching documentaries, listening to Jimmy Buffett and Johnny Cash, love my Catholic Church and Nutella - not necessarily in that order.

Homeschooling and being a fulltime mom is my life's work and I have freakin' love every minute of it. I've always worked from home running businesses, writing, or some such venture but my heart is happiest when I am being mom.
I talk about a lot of stuff, because a lot of things knock around in my head and if they don't go somewhere I end up painting and repainting rooms and chronic rearranging my house. So cut me some slack.

I have lots of ideas and opinions. We all do. Don't be offended. They're just mine and I have no ability to impose them on you so if they seem horrific, critical, unobtainable or nutty, move on - no problem. Do whatever works for you and celebrate it. I am doing what works for me and I love it.

This blog has been around for many years and is undergoing a little TLC. The content will return, links and the bells and whistles. But for now... you just have my ramblings to entertain you ;) Thanks for your patience.